The New York Knicks’ rich history includes six of the 50 Greatest Players in NBA History: Patrick Ewing, Willis Reed, Walt Frazier, Dave DeBusschere, Earl Monroe and Jerry Lucas, but did you know that it can also be linked to Washington Irving and the Dutch settlers?

The Knicks are one of only two teams of the original National Basketball Association still located in its original city (the other being the Boston Celtics).

The term “Knickerbockers” traces its origin to the Dutch settlers who came to the New World – and especially to what is now New York – in the 1600s. Specifically, it refers to the style of pants the settlers wore… pants that rolled up just below the knee, which became known as “Knickerbockers”, or “knickers”. 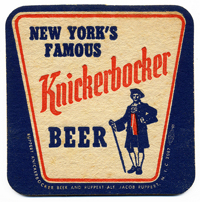 Father Knickerbocker became the city’s most popular symbol of the late 19th and early 20th centuries, complete with cotton wig, three-cornered hat, buckled shoes, and, of course, knickered pants.  The final decision to call the team the “Knickerbockers” was made by the club’s founder, the legendary Ned Irish.  The first logo of the New York Knicks is of a character named “Father Knickerbocker” dribbling a basketball, in the iconic blue and orange colors.